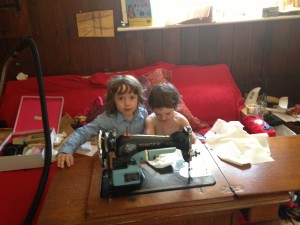 If you know us at all you probably know our children don’t go to school. I’m not quite sure what to call what we do. For a lot of people within the movement, “home-schooling” implies schooling at home, so sort of following a school-like syllabus and time table, but in a home environment instead of at school, and it’s the model a lot of people start with, particularly if they have taken their children out of school because of bullying or learning issues. When parents decide to tutor at home in this way, do you know how long it is recommended they set aside daily to cover the school syllabus? Two hours….

Unschooling is more what we do, although I don’t much like the term. I always prefer to define things in terms of what they are about, not what they aren’t about. So the horses are barefoot, not shoeless. I’m a vegetarian, not meat-free. Unschooling to me also implies some sort of undoing, sort of reversing the schooling process, taking away some of the processes and habits that have been instilled, which isn’t the case with us. I very much appreciate the work of John Holt who came up with the term, but not so much the term itself. This is what wikipedia has to say about unschooling:

“Unschooling  is an educational method and philosophy that advocates learner-chosen activities as a primary means for learning. Unschooling students learn through their natural life experiences including play, household responsibilities, personal interests and curiosity, internships and work experience, travel, books, elective classes, family, mentors, and social interaction. Unschooling encourages exploration of activities initiated by the children themselves, believing that the more personal learning is, the more meaningful, well-understood and therefore useful it is to the child. While courses may occasionally be taken, unschooling questions the usefulness of standard curricula, conventional grading methods, and other features of traditional schooling in maximizing the education of each unique child.

The term “unschooling” was coined in the 1970s and used by educator John Holt, widely regarded as the “father” of unschooling.[1] While often considered a subset of homeschooling, unschoolers may be as philosophically separate from other homeschoolers as they are from advocates of conventional schooling. While homeschooling has been subject to widespread public debate, little media attention has been given to unschooling in particular. Critics of unschooling see it as an extreme educational philosophy, with concerns that unschooled children will lack the social skills, structure, and motivation of their peers, while proponents of unschooling say exactly the opposite is true: self-directed education in a natural environment better equips a child to handle the “real world.”[2] ”

The accepted term is “autonomous learning” in this country, and it is a completely valid approach as far as the educational authorities are concerned. If you provide education outside of a school setting, you do not have to follow a curriculum, nor do you need to make any assessments. The child can decide what to learn and when to learn it. It’s marvellous. And it’s worked well so far.

Of course, we find ourselves questioning the value of certain types of learning. Questioning as in questioning, not doubting. We don’t have to concern ourselves with learning objectives and outcomes all the time, but we are curious about the learning that comes out of certain situations. It seems to be that the official stance is that there are some key/core skills that aren’t really optional if  you want to be able to function fully in this world. Reading, for instance, writing, an understanding of numbers and how they work. Science and how the world works is jolly useful too. Ecology and the climate. Perhaps a language or two (I’m not convinced by this), a bit of geography, some history. More recently, emotional intelligence, conflict resolution, money and how to handle it, cooking and those other “real-life” skills …. And then, should you question the value of learning about the Aztecs or Ancient Egyptians or Algebra,  there seems to be a sense that you obviously can’t learn all the facts in the world, but the process of learning is in itself valuable, and that even if the things you learn aren’t directly applicable to the life you may lead or are leading, it isn’t wasted time because exercising the brain can’t be a bad thing.

Young children are natural scientists, employing the scientific method of hypothesis, test, new hypothesis, re-test, etc from an early age, and I have never been worried that they would find science boring in any way, because it’s really just curiosity about how the world works. Reading and so on has been fine, because they’ve loved being read to so much, and there are some great on-line resources to help with that and make it fun. Maths was a bit more of a worry to me, certainly in terms of higher-level stuff. I can’t work out if it isn’t necessary to know it, because so few adults do use it, or whether it’s somehow important to learn it anyway, just because of the way it makes your brain work. I still am working on the assumption that should they wish to go to University they will need to pass various assessments. However, their understanding of numbers is very sound, it seems to me, and I think they will possibly enjoy the more abstract maths as a problem-solving challenge later on.

So we live our lives and through that they learn what is useful to them and lots of stuff that is just interesting, and until very recently I haven’t had to make them do a single thing. But there is one skill that is generally considered essential that they simply don’t find a natural need to do, and one that possibly they may not even need when they are adults. We don’t model it that often for them, and it is hard to really justify the necessity of this skill in the modern world but I want them to do it anyway. Any ideas what it is?

“Since your visit to me last year, Halle and I have completely turned a corner.”N.H. (Glos)

“Possibly the best learning environment I have ever experienced”C.H. (London)

I will continue the work that Adam has shown me and really cannot thank him enough for giving me new skills to build a fantastic relationship with my horse. I have recommended him highly to several of my friends that have horse issuesG. S

What a fantastic clinic yesterday,  it was a great bunch of people, a wide range of horses,  ages and lovely weather. I think the star of the day was K and S  – what a difference from morn to afternoon!K.W. Newbury

“In the 2 and a half years we have had him, he has never loaded like that before! It was amazing to watch…”R.O. (S. Wales)

It was probably the best feeling I ever had in my life!!!!!!I couldn’t believe it. I was loading my own pony for the first time!!!!Adam had literally saved our lives we couldn’t thank him enough!!!The time had come for her to load herself. I was so exited!!!!OMG she had loaded herself for the first time in her life even I didn’t have to go up on the ramp with her!!!! I had no words at that point!!!!!How or what Adam did that day was unbelievable he even spoke to our cat!!!!!!Thank you very muchAbigail Lee  Xx

“The most valuable part of the clinics is the wonderful effect you have had on my relationship with my daughter…”A.D. (Devon)