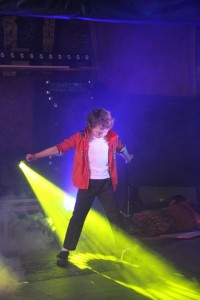 So, we do “self-directed” or “autonomous” learning.  Our children learn what interests them, when it interests them. My son has a learning style that involves complete immersion in a subject and then leaving it completely alone for a while. Some interests he returns to repeatedly after these long gaps – like playing the guitar. It’s all day every day for months, and then one day he puts it down and doesn’t pick it up again for months. When he does, he continues where he left off, except that he is bigger and stronger and his fingers are longer, and he seems to have made a quantum leap in his ability, without having “practised”. This has surprised me a lot – my understanding of learning before I saw this demonstrated was that you couldn’t expect to improve without actively learning. I knew about latent learning, but I didn’t expect it to work in this way, over long gaps.

He also studies You Tube videos intensely in order to work out things, like, Michael Jackson dances, and when he feels he is good enough he will perform in public given half a chance.

From an early age he has had great fine motor control, which isn’t always the case for boys, and has found handling scissors, chopping food, and drawing and so on quite easy. He has been happy to sign his name on cards. He even wrote a short book last Christmas for his dad. He has never become obsessive about writing, but even so I have noticed that each time he has written something, even if there have been long gaps, his writing has improved. But…. there are these long gaps….. weeks go past without him picking up a pen….. he’s seven…… is this a Good Thing?

Interestingly, to me at least, even though he doesn’t use a pen a lot, he does use drawings to explain things, even though this isn’t something we do a huge amount any more, so he isn’t modelling us in this. There have been times in my life when I couldn’t think without a pen in my hand, at least not think in that organising, intellectual kind of way. Although I don’t do lists very much any more, planning and putting my thoughts out on paper is still, sometimes, very useful to me. I have often wondered if there is any research on the benefits, if there are any, of keeping thought processes in your head rather than needing to put them on paper? Mental arithmetic as opposed to writing out sums? Remembering things rather than writing lists? Is it just a personal preference or are there benefits to NOT writing? I suspect that there might be some, and that there is probably nothing wrong with a very small child not writing stuff down all the time, but he’s no longer a very small child….

Sadly, as well, with children, they can get away with quite a lot when they are very small and it’s cute, but as they get older it becomes less so. My son has a unique way of doing his capital Rs, which I adore, and his capital Ys are back to front, but I probably won’t correct this, as it is legible. His sister also does her Ys in the same way, and it’s lovely. It turns out I’m not an automatic rule follower, and my criteria is that it’s easily legible, which is my principal objection to cursive writing.

I am aware that if he went to school he would write every day. He would be doing joined up writing by now, which I personally think is a very bad idea, and I’m very pleased he doesn’t have to do it, but still, he would have done lots of writing. Trusting the process of them learning what they need to learn so far has not resulted in him doing lots of writing, because the truth of the matter is that it is becoming an increasingly redundant skill. When he grows up, when will he actually need to write? Hardly ever, I suspect. I have provided subtle encouragement, like suggesting he keeps a log of the fish he catches, and he wrote up the results of some science experiments we did with soluble and insoluble substances, but still it hasn’t amounted to much writing. Christmas is coming, and although we haven’t sent cards for years, I thought this would be a good opportunity to practise his writing if we do so…

But, and I’m being completely honest here, I’m aware that people might judge his writing and it turns out I’m not very comfortable with that. Considering the amount of time he has put into it, his writing is actually astonishingly good, but….. even if it might be partly motivated by shallow reasons of embarrassment and pride,  it seems to me that it’s time to get him to practise writing.

Something else is going on, as well. He isn’t good enough at writing for it to be remotely pleasurable. It takes so long for him to write a word, especially as he has always favoured capitals. I know that if he puts a bit of time into it, it will get easier and he might actually come to enjoy it.

I think if I had done this, with him, a year or two earlier it would have been a “disaster, darling”, as Craig would say (and it should be mentioned that Strictly Come Dancing has helped both children be good at adding 4 digits together, and sometimes their four times tables). He is getting better and better at dealing with pressure, but there was a time when he really couldn’t handle any at all, in a learning environment. He hated being asked questions. He hated anything that felt like we were teaching him. He hated if anyone was more skilled at anything than him. Only in the last year or so has he accepted any kind of input from his dad about playing the guitar (although he will happily watch You Tube videos about this). He was pretty good about me teaching him to knit, but in general he needed quite careful handling, and I think if he had gone to school and got the impression he was substandard at anything, he would have struggled and been a very disruptive element in the class.

I am very cautious about pressure, and making people or horses do anything. I have seen much damage done, and it is hard to undo. The horse that has been worked in a heavy-going, deep school when they are young can be fairly permanently soured to being schooled or even ridden. I have come across many adults who have not come out of school with the skills you would expect, and many who can pinpoint the moment that it was all ruined for them. I have “worked horses through resistances” and wondered whether what I am doing is ethical, and possibly creating more problems for the future. I have also worked horses that have been unenthusiastic and I have realised that if I can get them going, they will get fitter and get into the process more, and that left to their own devices they might not go there.

So, for the first time in this educational journey, I have made my son do something: sit down and practise some writing. He warms up for it by drawing diagrams to explain his favourite apps to me, which is slightly odd, but it works. We refer to the Eggy Alphabet App  on the ipad to practise the best way to write the letters. He practices the letters he will need for a thank you letter he needs to write and the Christmas cards… We have dated each page and I’m hoping that by day 10 he will be finding it easier and will be able to see his progress. There has been squirming and protests but, as I was hoping, these have become less vociferous and I feel I have done the right thing. People who make their children do stuff all the time won’t understand my concerns about this, but hopefully others will get it.

I’m not confident that he would have come to this on his own, so I’m intervening. I can’t really pretend I’m certain that he will ever need to write really well, but I’m hoping he will discover the pleasure of real writing with a pen. The thing about being happy with the long gaps and the returning to previous interests is you can suddenly realise something important has dropped off a list and needs to get back on it, somehow. And, if you can think of something that really sells the necessity of writing, please let me know!