Craig is a trainer of French school Classical Equitation, based in Seattle, Washington, USA. He became involved in teaching clinics in the south of the UK in about 2000. In 2003 Adam and Nicole met and began studying with Craig. They visited his barn in Seattle as well as studying on many of his UK clinics and intensives. Craig has also visited Moor Wood on many occasions. He lives and teaches in Seattle as well as UK and Europe, and can be reached at http://www.classical-equitation.com/ 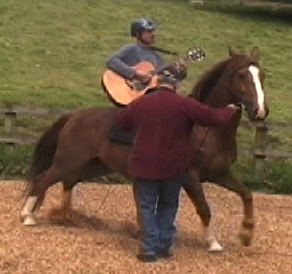 Craig with Adam and Asterix in mid-explosion

Craig features strongly in Born to Whisper, an extract of which follows.

From Chapter 19, “Opposites Attract”, by Adam:

Arriving at the clinic the afternoon before it was due to begin, I was greeted by a very informally dressed man who resembled a walrus in everything from his whiskers to his enormous size*, except he had no tusks. With his baseball cap, jeans and sporting a pony tail, a more different person than diminutive, super-fit Mary Wanless could not be imagined, and he looked nothing like I would have imagined a French Classical Dressage Master. Craig was very friendly and relaxed in conversation, and I was struck during the lecture he gave the first evening by how, like Mary, he was acutely intelligent and knowledgeable on many diverse subjects, ranging from philosophy to martial arts, but especially the history of riding. He lectured without notes for several hours, beginning with a detailed history of the origins of classical horsemanship, followed by a discourse on the aids, described in a completely different way than Mary. It was all a world away from what I was familiar with – I felt intrigued and ignorant, and completely out of my depth, all at the same time.

Which just about sums up my first ride…

* Craig has lost several stones in weight since this was written