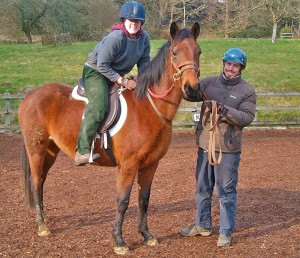 There was a time when, I have to admit, I saw the work we did training horses, especially “problem horses” as more….not glamourous, perhaps, but more worthwhile and skilled than, say, running a livery yard. We were sensible enough not to turn away any income streams, but a livery horse was definitely incidental to the “proper” work we were doing with horses. 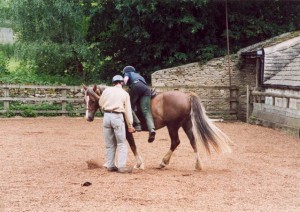 And the work we were doing was definitely “proper”. These were horses with proper problems, many of whom had defeated trainers way more experienced than us. Monty Roberts was having to prove himself to the establishment, demonstrating that he could work with the most dangerous death-row horses, and as a result so were we. “Thrown in at the deep end” doesn’t even begin to describe it, but we did it and we swam.

The horse in the picture here is High Flyer, a bottle reared horse who as a yearling was so dangerous that his owner gave him to us and paid us a sum of money to sweeten the deal. We now realise this sort of thing makes no business sense at all! But we learnt a lot from him, he brought a lot of pleasure to a lot of people, and we eventually sold him to a favourite client who has had a lot of fun with him since.

At one point, we were teaching so many clinics  that the liveries didn’t make sense anymore. They could never get into the school because we were always in there with the clinic participants, or a training horse, and as we weren’t charging enough for livery, they weren’t making us any money. So we closed down that side of the business for a while (not kicking anyone out, of course, we let them find places in their own time, and in fact a whole group went together and found a great solution).

We were also having a lot of horses in for training, which in the early days we definitely saw as a short term thing, but of course people whose horses came in for training would ask if they could keep them with us, and a surprising (to us) number of horses came for a week and just stayed on. We always had too many of our own horses, of course, so we always had horses on site that needed looking after and so after a while having some extras as liveries (charged at a rate that could contribute to paying the rent) made sense.

Over time, we also came to understand the land and its particular quirks, and how best to manage it. We worked out that however big separate herds would be, if we can possibly manage it, it is better to run the whole group as one herd. We realised there are underground springs that become overground in certain conditions, and that it is sensible to avoid having horses on these if the ground is wet.  We know that strip grazing stops the horses from being ridiculously picky eaters, and that having your own sheep is far better than borrowing some from the neighbour, because he never takes them off until they have eaten all your winter grazing…. We realised that a track system, of sorts (we can’t lay down any surfaces on our ESA (Environmentally Sensitive Area ) land, means that the horses will move around more and keep fitter. And over time we have realised that doing our best to create a fabulous environment for the 15-20 horses who live here is a perfectly fine way to make a living. 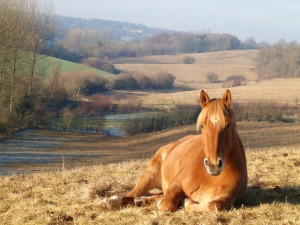 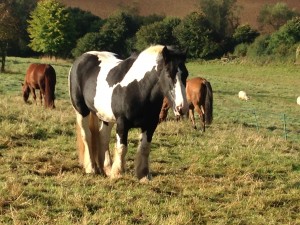 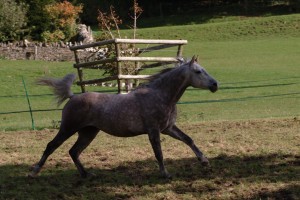 I’d like to say that we still train horses, but we cater more to the gentler side of things – the horse who is a bit pushy, the human who would like to learn to long-line, that sort of thing. We do those things, of course, and with great pleasure, but we still find ourselves dealing with some of the very trickiest horses there are from time to time. But we don’t feel the same level of obligation to take these horses on, and we don’t go out looking for them. When we were first starting, there were not that many people doing this sort of work (and by “this” I mean effective and without cruelty, and I’m not particularly referring to just our own “school” of doing things), and it meant that if we turned down a particular horse the owner had very few options – just keep the horse (if they weren’t dangerous to handle), put the horse down (if handling the horse was very dangerous), or try to find someone else, who often, in all honesty, made the problem worse… Now there are lots of options out there, and owners have a lot of choices, and if we don’t take on a particular horse, the owner can find someone at least as suitable (if not more so for certain types of horses).

So we now find ourselves with a livery yard that is as full as it can be, and are doing a lot of regular lessons, workshops, and callouts. We are debating how well it would work to take in some starters for the spring….. 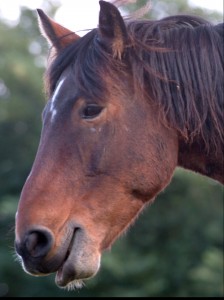 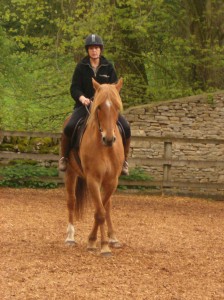 This charming livery belonged to Kay Humphries and she paid us in saddles which was fabulous.

The ridden horse was an ex-show jumper who was so afraid of poles that you could keep him in anywhere by laying them on the ground. Not that we did, because it was so traumatic for him. He was also quite aggressive, but he became very loving, and his wonderful owner was totally committed to him. He is also the cover horse for Born to Whisper. He was on livery with us for quite a while, but his owner lived in Surrey and eventually moved him nearer to her. Sadly he died a few years ago, but he had a fabulous life at the end. 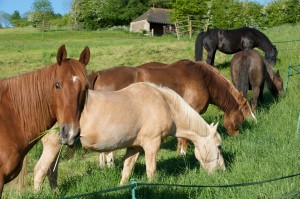 But the thing that makes it soooo satisfying, perhaps even more than the horses who (almost but not quite always) seem to love it here right from the start, are the owners who breathe a sigh of relief when they realise we really do mean year-round turnout and that, in spite of the imperative to earn money to pay the rent and perhaps secure our future, we really are doing this because we want the horses and their people to be happy. I think it’s what comes from starting with a passion for horses, rather than starting with a business model. Over the years (and we’ve been here  since 1998) we have come to realise that we can’t keep doing what we’re doing if we can’t pay the rent or feed ourselves, and that we have a number of physical challenges which probably aren’t going to improve much with age (arthritis, fibromyalgia), so we need to work *on* the business as well as *in* the business…. Hence, partly, this increased volume of posts! But also, we hope people will find it useful and interesting, and it’s nice to get (at least some of ) the thoughts out of your brain and out into the world. 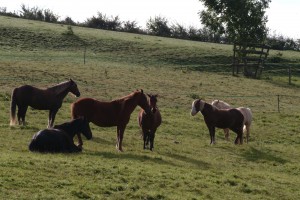 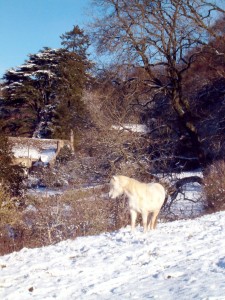 Misty in the snow. It is super pretty here at Moor Wood when it snows, although the novelty can wear thin!