Hosting a clinic and demo together

Combining a clinic at your home with a demo in your area would be an opportunity for you to make a significant profit.

If you put on a demonstration, say on a Friday or Saturday evening, and it is well attended, then it is very likely that some of those present will be interested in coming for lessons the next day, some of them with their horses. During the demo Adam would advertise the fact that he will be in the area the next day, or two days, doing lessons/clinic, to which all are welcome either as spectators or riders.

This is potentially a really powerful marketing tool. If you are organised about it, you would be able to make a lot of money here. If all those present are signed up onto an emailing list, and are encouraged to come to future events, it could become a regular opportunity for us to work together with your horse and your friends, to form a stronger local community of like-minded horsemen, and to earn money for you and/or a charity if you so choose. The more well-organised you are – it helps if you have some experience of putting on events like this – the smoother you could make it become. 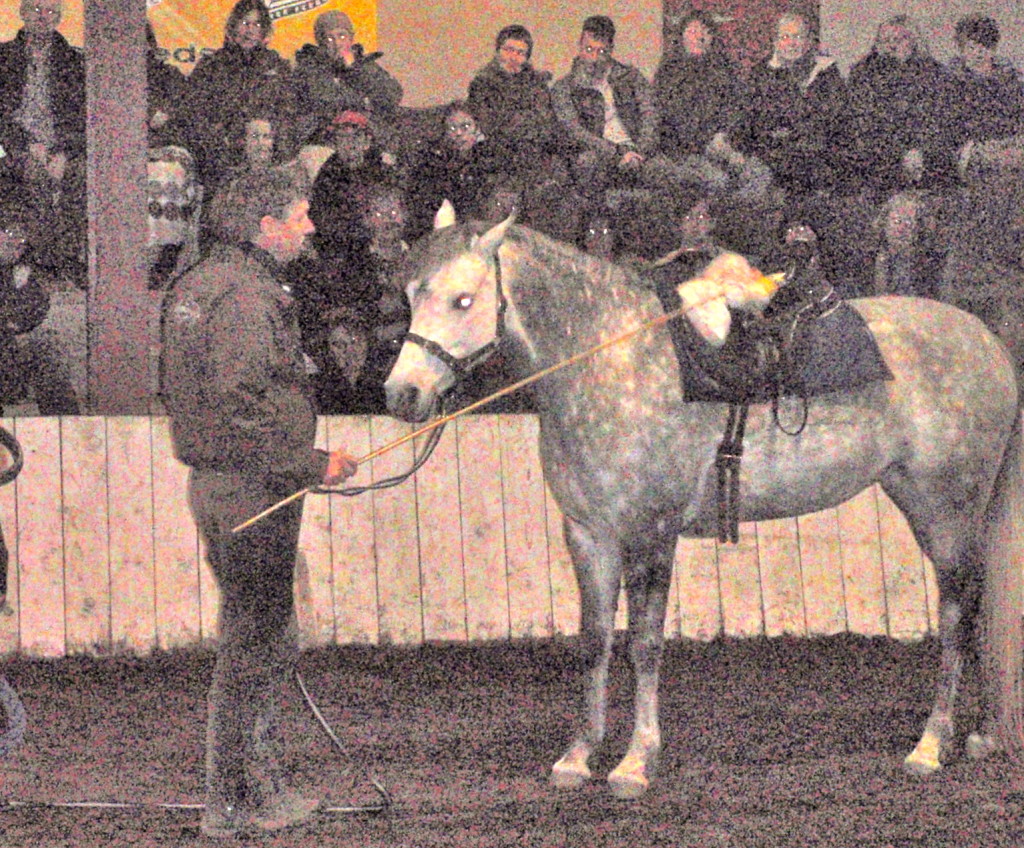 A complete stranger contacted us asking if we could give a talk for her to help make enough to pay for the annual and start-up costs of her small charity, North Wales Endurance Group. She was brave enough to take up our suggestion of a full blown public demo on the Saturday evening followed by lessons the next day. Her organisational skills were excellent and she booked a local arena, organised a few horses for Adam to work with, and publicised it well via home-made posters, internet (notably the IH web site), and grapevine, including the Endurance Group but also the Riding for the Disabled (RDA). 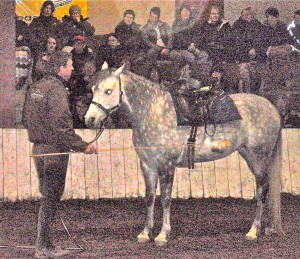 Our demos may not be as dramatic as Monty’s, but they could be said to be more relevant to everyday horse people

Adam travelled up on the afternoon and charged £315 for the demo day. The demo started at 7.30 pm and went on, with 2 short breaks, until about 11.30pm, an over-run due to demand. The topics covered included a horse with problems standing still to mount, one with terrors of ground driving/lungeing/long lining, and the last horse was simply a ridden case prone to panic and strapped up with lots of leather, so we investigated issues such as contact, flexions, in-hand work, and how to ride with sensitivity. The three horses improved enormously. The first one was owned by the organiser so she got a session of about an hour which made a huge difference to the mounting issue. 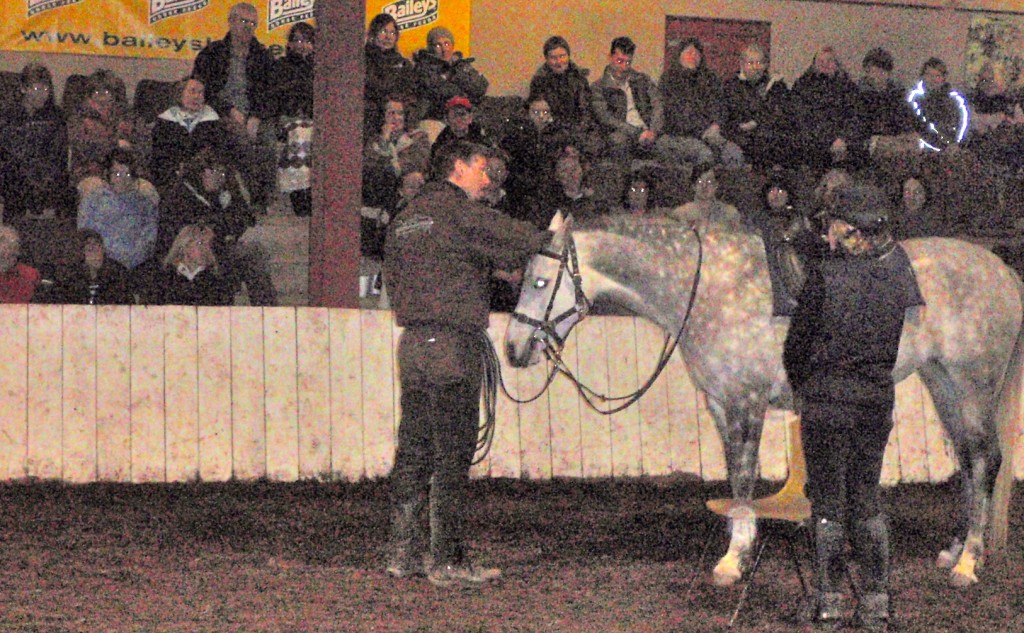 By the end, the horse was almost this relaxed whilst being mounted, without Adam nearby

The organiser paid Adam’s fee, the cost of hire of the arena, and earned £200 or so for the endurance group and almost £1000 for RDA, as well. She received training for free in addition. Ninety people attended the demo. Tickets were £15, and the raffle, to which we contributed two books and a grand prize of a riding clinic, raised many hundreds of pounds. Many people donated prizes. The response was overwhelming, and Adam has been asked to return. 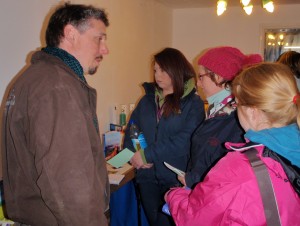 There was a range of ages and types at the demo, but they were all horse lovers

The next day Adam worked all day, in the area, most of the clients having emerged the night before. This has opened up many other contacts in the area and opportunities for demos in other venues, which others have offered to do the hosting for. As her prize for organising those lessons on the day after, the organiser will receive an extra lesson when Adam returns to the area- she couldn’t at the time because one of her other horses fell ill with a major colic the night of the demo.

This kind of horsemanship attracts compassionate, educated, inquisitive and honest people, and it also brings the best out of anyone. A community can easily emerge and strengthen from such an event, if the inspiration and perspiration are supplied to make it happen. You or someone you know, could be the linchpin of such an event, and it could make a real difference to horses and horse lovers in your area. Email us for the next step. 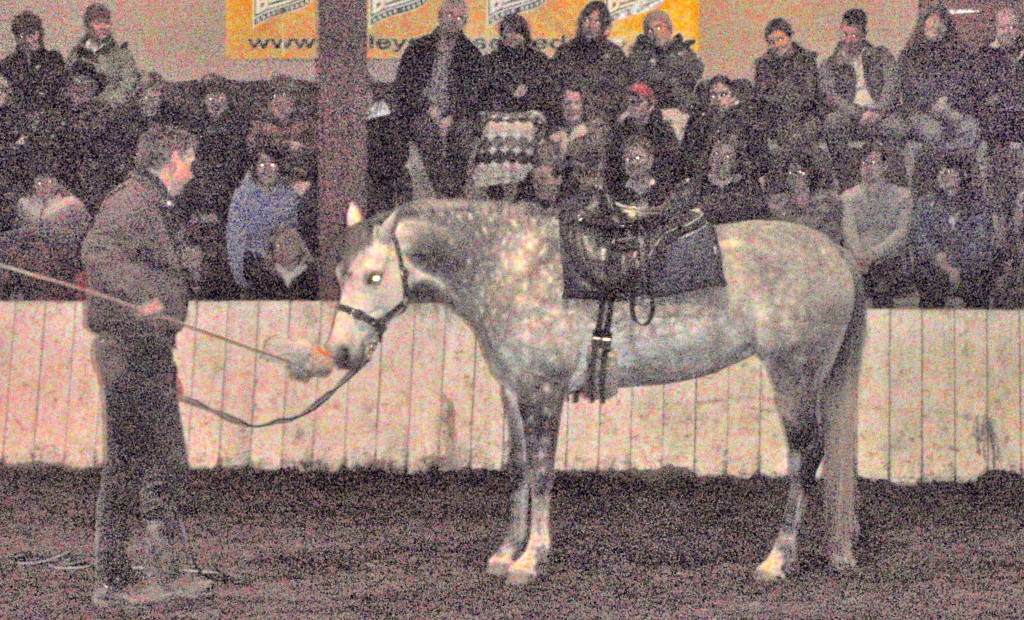 You can almost see how scared the horse could have been