“At the heart of their journey, as in mine, lies a burning desire to do what’s right for the horse.”

Born in 1969, Adam Goodfellow and Nicole Golding met while studying at Cambridge University in 1988. Nicole’s lifelong ambition to own a horse was finally fulfilled when Adam bought her Sensi during their second year, and his interest in horses was mildly kindled. He learned to ride and in the early 1990’s they started Sensi’s School, probably the smallest riding school in the world. 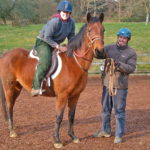 Meeting Monty Roberts in 1996 changed everything for both of them. Nicole was able to turn her back on the dominant methods taught in her childhood that she’d never been happy with, and Adam suddenly found that communicating with horses in their own language was immensely more rewarding and interesting than knowing the difference between various types of bit! 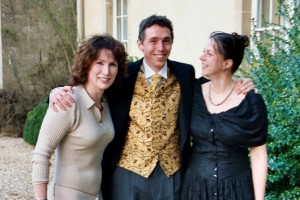 With Kelly Marks at our book launch party for Whispering Back

Nicole was one of the first ever (1996) students on the Monty Roberts Preliminary Certificate of Horsemanship, and went on to help Kelly Marks with these courses,  becoming a teacher in the methods almost immediately.

As well as their degrees in Social and Political Sciences from Cambridge, both Nicole and Adam have a qualification in Teaching Adults in Further Education. Their expertise in teaching has been greatly enhanced from studying in Mary Wanless’ Teacher Training courses. Adam also has a qualification in Teaching English as a Foreign Language, which he used to good effect for several years as a teacher in a Japanese school in Milton Keynes. Both love to read, Nicole being especially interested in psychology, Adam in history. Her pastimes include knitting, cooking, cats, tea, piano and Strictly Come Dancing; his include playing guitar in his rock band SCSI, Manchester United (strangely enough!), and trees including ancient trees, planting and felling for the wood burner. 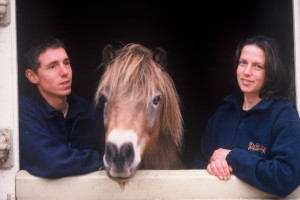 With our Exmoor pony, Finn

Since completing their Monty Roberts Preliminary Certificate of Horsemanship Adam and Nicole have gone on to help literally hundreds of people and their horses, solving seemingly insurmountable problems. In 1998 they moved to Gloucestershire, where they set up a yard in the picturesque surroundings of Moor Wood stables. They were among the first of Kelly Marks’s students to become Intelligent Horsemanship Recommended Trainers. Twenty years later, their landlord’s son decided he needed to move into their home, and they had to leave. They found a stunning location for the horses, and eventually moved to Stroud, which had been exerting its gravitational pull for some years. 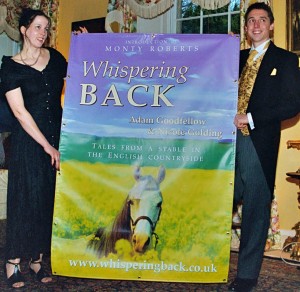 Whispering Back was launched in 2003 and is still in print, having sold about 20,000 copies

In 2001 Nicole and Adam were approached by Ebury Press, and asked to write a book about what it was like being “horse whisperers”. The result was their first book, Whispering Back, which has been continuously in print ever since, and has sold about 20,000 copies. Described as an autobiography with horses, it describes their journey into horsemanship, meeting and working with Monty and Kelly, and many of the wonderful horses they have met. [click here to buy signed, discounted copies of both their books, or subscribe to the newsletter to download sample chapters]

Their second book, Born to Whisper, takes up their story from 2003- 2009. Always intrigued by different approaches, they have continued to be avid students. As well as Monty, other influences, notably 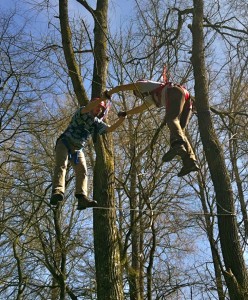 We are usually up for a challenge! Us at the Moor Wood ropes course, facilitated by Robert Razz

Craig Stevens and Mark Rashid, have contributed enormously to their understanding of horses and horsemanship, and Adam and Nicole have developed their own unique blend of methods and techniques, integrated into a cohesive approach, that they feel offers the most optimal and ethical training system. Along the way, they have learned rather more than they wanted to about the effects of poorly fitting saddles, unbalanced feet, and compromised movement.

Becoming parents – another major theme in Born to Whisper – has made their lives even more hectic and fulfilling, and not surprisingly they have some not entirely mainstream views about parenting, too! Both their children (Marley, 2007, and Layla, 2009) were born in the barn at Moor Wood, and the plan is to educate them at home. 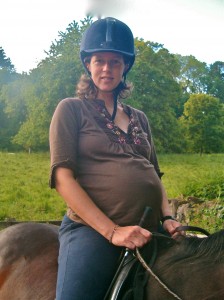 Very sadly indeed, Sensi died in 2016, after 25 glorious years in our lives, aged 28. Cobweb died a few weeks later, at the stunning age of 41. Misty and Finn are still with us, in their very late twenties now. Karma is still with us, taking on the role of lead mare, aged 20+.