Problems with hoof trimming, clipping, standing still to be groomed, tacked up, and so on, often arise through a misunderstanding between the human and the horse: the human doesn’t understand quite how difficult what they’re asking is, and the horse hasn’t learned how to comply with the request.

Introducing the horse to these areas in a systematic,  structured and progressive way will allow the horse to learn how to do what is needed. Not only does this make the horse easier to handle, it also makes it more likely that they will be handled well throughout their lives. A horse who isn’t struggling for balance while someone picks out his hooves, for example, is less likely to be shouted at or hit for trying to snatch his leg back.

Where horses have developed problems, breaking the issue down into manageable chunks and consolidating each stage until the horse is happy allows rapid progress to be made.

Mouse is an Exmoor pony that had a lot of issues about everything – largely due to some terrible early handling experiences. Here we are working on getting him happier about having his feet trimmed. I’m wearing a hat and a long sleeved jacket as he wasn’t above the occasional bite or kick! 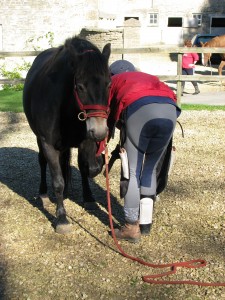 This is what his owner, Steve, posted about us on facebook.

“When we understand horses, treat them with respect and communicate with them in a way they understand, free from pain, fear and intimidation, even traumatised horses respond positively and quickly.”