Kelly Marks is the founder of Intelligent Horsemanship, an organisation dedicated to bring the best horsemanship ideas together from around the world in an effort to promote understanding and fair treatment of horses at every opportunity. Kelly and her team run educational courses from Witney, in West Oxfordshire.

Kelly is one of the country’s most popular and effective specialists in understanding horse psychology and behaviour and finding workable solutions for the benefit of both horses and their owners.

Her father being a Lambourn racehorse trainer, Kelly has been around horses her whole life, winning BSJA (showjumping) Championships as a child rider, she went on to great success as a Lady Jockey retiring from racing after winning a Ladies European Championship in 1995. Kelly met Monty Roberts through a chance meeting at a French petrol station in 1993. She often recounts the Zen saying ‘when the student is ready the teacher will appear’ when she tells the story. Monty asked her first to help with the writing of his book ‘The Man Who Listens to Horses’ and she also took time to work alongside him with ‘the horses with problems’. She was soon inspired by the thought of all the horses and people that could be helped by the use of his simple and yet revolutionary techniques. After a conversation with HM the Queen, Monty Roberts later asked Kelly to put together courses in his methods and she became the first ever teacher of his methods world-wide. 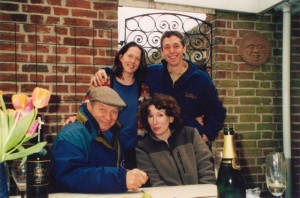 Nicole and Adam with Monty and Kelly