An interesting compliment that might have once offended me

By NicoleJune 17, 2021Musings
No Comments 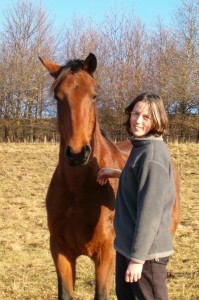 On a recent workshop, one of the participants gave me some interesting feedback. She said (something like) “You’re very good at letting people learn within their own frameworks. You don’t over-correct and I like that because I find being over-corrected can paralyse me.”

Now, this came about because this person was quite chatty with the horse. She told him to walk on, she told him to stop, she told him to keep going, she called him by his name. She had never worked with him before, and they hadn’t worked out a code of communication, and the skills I was teaching her were meant to be pretty universal, so didn’t need supplementing. I’m not the biggest fan of people talking like this, for a few reasons. 1) The horse doesn’t understand the actual words (probably), but 2) asking specifically for something verbally can make it look like the horse is refusing a request that we might imagine he understands, and 3) the person who talks like this doesn’t always hear instruction and coaching from the instructor/coach, and indeed you can feel like you are interrupting. However, observing open-mindedly, it has to be said that the horse seemed to be responding well, and was more engaged with this person than he perhaps had been up to then. He seemed to appreciate the praise.

In the past, I might have felt like I was letting her get away with something by not really addressing this issue. I might have been slightly offended, taking this as a sign that I wasn’t committed enough to ensuring the student really “got it”. As it was, I did explain in a general sort of way why we don’t usually do it that way, but I think historically I would have been stricter, and really asked her to try not to do it. She might have spent a lot of her energy consciously trying to be quiet, and I think to pick her up on this particular approach would have been negative.

In fact, I know historically I would have been stricter, because I know that a client and I once got quite frustrated with each other over voice commands. She drove, and so had horses that she used voice commands with, and of course with blinkers and the positioning of the driver, body language doesn’t come into it much. Of course, she used the reins, and a whip, but she also used the voice as an adjunct and found it helpful. My point wasn’t that horses can’t learn voice commands (they can), but that usually when people use the voice they also use their body language and they think that the horse is responding to the voice, often because they don’t even know they are using their bodies.

I sometimes demonstrate this by working a horse on a single line, and asking the audience to come up with some words that will be used for walk, trot and canter. It could be anything, and fruit often comes up. So say it’s pear for walk, apple for trot,  banana for canter, and plum for halt. By raising my energy a little and saying “pear!” quite briskly it’s easy enough to get the horse to walk on. “Pear on” usually sounds so crazy to people that they laugh aloud. “Ap-ple!” with more energy and perhaps a little flick of the line and the horse will happily trot. Saying “Banana!” with emphasis and doing a little skip into canter myself will usually work, but if not I can raise my energy further and flick the line a little, move in towards the horse with more assertion, and canter will usually happen. 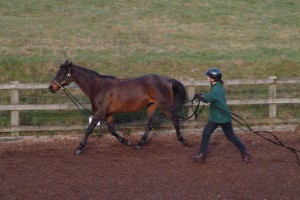 As much as anything else, it’s the body language communicating to this horse (darling Sensi) to move on.

Then it’s “appppppplllllle” in a soothing voice and a backing off of the energy to get back down to trot, “peeeeaaaaaar” and a further slowing of the feet, dropping the energy still further, and finally “a-and, pluuuuuuum” as the feet stop moving completely and the horse comes either to a halt or a very slow walk (getting horses to stop quickly on a single line is notoriously difficult).

Now, I make no secret of the fact that I’m going to be using my body language and energy, but still there are some people who suspect I am actually brilliant and have really taught the horse these words, and very quickly too. Any suspicions in this area can quickly be dispelled by removing the body language and tone of voice and observing that in fact the horse doesn’t understand to “pear on”. Even using the normal tones of voice does not in itself usually get the horse to respond in any appreciable way.

So, it’s not that we can’t teach the horse voice commands, it’s that people often think they have when in fact the horse is actually responding to their body language and energy.

Anyway, this is a fun thing to do and it helps people understand that sometimes they aren’t paying attention to the most important factor, because they are being distracted by something else. But then, perhaps that was true of me and this previous client. I didn’t build great rapport because I was too keen to show her that something she believed to be true probably wasn’t. And of course, showing people that some of their beliefs and approaches to their horse aren’t accurate or beneficial is part of my  job, but it’s also a question of how gently you can show someone a different perspective, and also how you can sow the seed and let it grow with them, in their own time. It’s also a question of how much it really matters, too. Talking to a horse you’re training isn’t a crime, although you aren’t allowed to in a dressage test, and if it IS a bad habit, it isn’t the worst. I certainly talk to them a lot in other contexts, and to the sheep as well of course.

And then of course, there’s the question of how much they really understand. I will never forget explaining to a horse how to do something, in words and with my hands on their body, slightly as a joke and also to clarify something to the rider, and the horse going away and doing exactly what I suggested. But that’s another blog…… 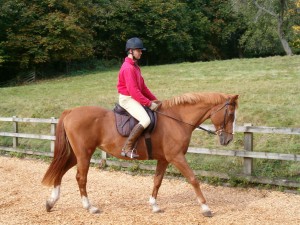 It was this horse…..