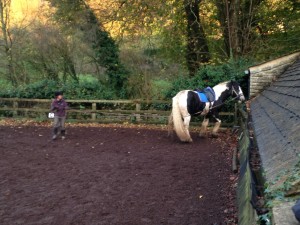 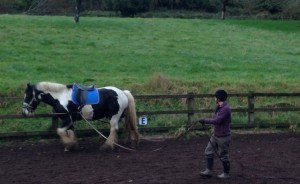 The long-lining workshop last Saturday was great fun, and the weather was extremely kind to us. The BBC forecast changed it’s mind every hour, but in the end it was dry and mild, and the sun even made an appearance later on. Poor Sensi consented graciously to come out of retirement and bestow her keen teaching abilities upon the students, and was her usual strict self, ensuring accuracy and intent were displayed in appropriate quantities. Milburn made sure that everyone got a proper workout, including me, and encouraged his long-liners to jog along with him, rather than be lazy and simply walk. He seems to feel that if he is expending energy, he needs complete commitment from his human. Which is fair enough.

The Magnificent Milburn is still looking for one further devoted sharer… £30 buys a two day a week share. He will gladly teach you everything he knows, in exchange for some carrots. Safe but not boring. And being a sharer entitles you to reduced rate lessons…..

One of the topics we discussed on the workshop was the importance of introducing the long-lines safely and carefully to a horse who hasn’t been long-lined before. It brought me back to my early days with Sensi, when I really didn’t have much of a clue of what I was doing, and called upon the protection of the Guardian Angel of Misguided but Well-Intentioned Horse People, Saint Ned, more often than was probably appropriate. I have tried to make up for it since by helping other people not make the same mistakes!

I read somewhere that long-lining was much superior to lunging, and I think I missed the bit that said it is also more difficult with more potential to go wrong. I have a picture of me and Sensi in an enormous field in Passenham, where she used to live. More than just being an enormous field, in fact, it was a series of interconnecting enormous fields whose gates were always open. She is wearing a grackle noseband, because Milton the famous showjumper was in his prime at the time. It’s loose, though, because I knew she didn’t appreciate having her mouth clamped shut. I remember a few moments where it was a bit hairy and I had to move quickly to prevent it all going horribly wrong, but I got away with it in a way that is not to be taken for granted. 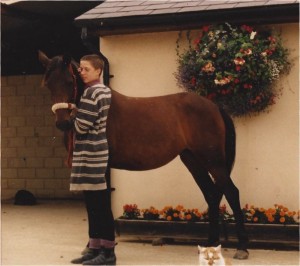 Sensi and I in our youths….I had my head shaved especially for graduation… I think my dad was delighted. If I get enough likes for this post on facebook, I will dig out the photo of our longlining madness!

That was more than 20 years ago. Sensi is in her late twenties now, and her colourful past is catching up with her. She isn’t in her physical prime, I’m sure we can say, but she is still as sharp as ever mentally. She has always been a strict teacher under saddle. If someone asks her to wonder aimlessly across the school, she will do it, even if in fact they thought they were asking for a circle, or shoulder-in, or a straight line. Sometimes it’s been exasperating, as people can do with being cut a little slack sometimes, but she has always insisted on absolute accuracy. Once a clinic participant got on her, gathered up the reins, and gave her a hefty kick in the sides. Sensi looked at the person’s leg, looked up at the rider, looked at me, and sighed audibly. She seemed to be saying “Tell her, would you? We don’t do things like that around here.”

Long-lining she has always been a bit more generous. If someone blocks her a little in the corner she usually assumes they have accidentally overtaken her, and carries on. I was mentioning this on the October workshop, in which Sensi also co-taught. It seems she has decided that she should bring the same level of scrupulous accuracy to her long-lining, now, and she was much less keen to let people get away with anything. She’s a hard task-master!

Long-lining isn’t easy, and the goal of the day was to get the horses to go roughly where the human wanted, at roughly the speed they wanted, and anything else would be a bonus. Everyone achieved this, and with a safe horse in an enclosed area would be able to continue the work and continue to improve. Of course, the horse provides an excellent feedback mechanism, and if you get something you weren’t expecting (half-pass instead of a straight line, for example, or an unexpected change of direction) you can usually work out what it is you were doing that caused it. One of the participants had a youngster (a 6 yr old with big gaps in her education, who had been training as a polo pony, so who had also been in quite a high pressure environment), and no facilities, and no previous experience long-lining, or even lunging, and so it was clear that “having a go” could lead to total disaster, and that it would be better not to call on Saint Ned. This horse will be coming here on training livery and we can systematically fill in all the holes in her training so far, whilst the owner also learns a heap of new skills.

Edited March 2019: We are putting together some One Day Workshops, on body language,  leading, classical in-hand, pole-work, single-line work, seat-training, lateral work, horse agility, “spook busting”, and loose work. Keep an eye on the website for dates and details, and if you’ve got a suitable yard (for many of these we just need a flat-ish enclosed space), please do be in touch. Cost £75 per participant (with hire of horse or school extra in some cases), and small groups. Duration depends on number of participants.